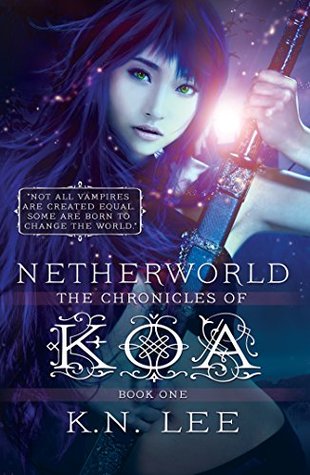 Purchased: Received from instafreebie, voluntarily read and reviewed, $2.99 on Kindle.

Blurb: Demons, ghouls, vampires, and Syths. The Netherworld Division is an organization of angels and humans who are there to keep the escaped creatures from the Netherworld in check in this action-packed paranormal thriller.

Introducing Koa Ryeo-won, a half-blood vampire with an enchanted sword and a membership to the most elite vampire castle in Europe.

A vengeful demon threatens everything Koa has worked hard to protect. Not even Halston and his legendary infinity gun can stop him, but Koa’s mother might be strong enough to do it–if only her curse can be broken.

There is one vampire that can help.

First stop, the Ivory Tower, where only the most notorious supernatural beings are kept. But even that won’t be enough. Koa must prepare herself to return to the place that nearly killed her. The Netherworld.

Review: I could not get connected to Koa at all, she was just a spoiled child. She even admitted that what she wants, she’ll do anything to get it. I felt more of a connection with the others but because it was mostly about Koa, I just couldn’t connect with her and that put a damper on the story.

With that said, it really was a pretty good story but I only liked it. The writing was good, could have been better, especially where Koa was concerned, I couldn’t even feel a connection between her and her love interest; though I’m not really sure who her love interest really is, but I did feel something for the two guys.

The cover, both editions are lovely, the one I’m using is beautiful but the writing doesn’t match. The story is a good idea but the execution could have been better.

I am curious about how it will all go down but it’s not at the front of my thoughts. I would recommend to those who enjoy an action-packed, slightly creepy teen story.

My Tweets
I’m bored…I’m so bored that I’m literally just skipping pages to see if I miss anything and I’m not missing anything. This is going to be added to the #DNF pile.
This was one of the most action packed ones in the #series, good lord. Still enjoying myself, still being kept on the edge of my seat. I am loving this entire series still and I’m sad, so sad that I just have one more #book to go.
Fourth #book down and I’m still loving this #series. It’s honestly a bit of a refresher to go through a series that isn’t strictly #romance. This just has the one and it’s not even at the forefront.
This one is probably even better than the first #book, You Don’t Know Me. I loved this one.