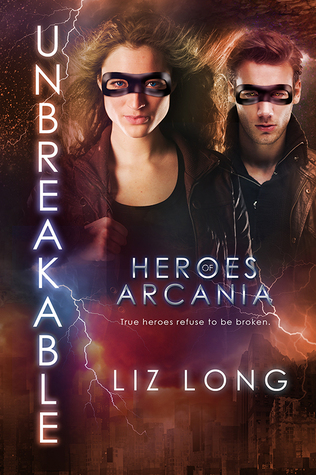 Purchased: Received free from the author in exchange for an honest review.

Blurb: True heroes refuse to be broken. Nova started the fight against Fortune for simple revenge, but now it’s turned into something much bigger. Arcania’s criminals are at each other’s throats, putting the city right in the middle of a warzone. She’ll have to work with a few unlikely allies to end Fortune’s games once and for all. Nova thought she understood what it meant to be a superhero, but will she have to lose herself to truly defeat Fortune? Fortune has given Cole a choice, one with unbearable consequences. When Cole takes matters into his own hands to save his sister Penelope, he realizes too late he’s another pawn in Fortune’s games. Fortune will use Cole’s gift against his enemies…including Nova. Cole will have to become the hero he always wanted to be if he’s going to protect the love of his life. Nova and Cole could finally save Arcania from Fortune’s deadly games, but are they willing to sacrifice each other?

Review: I feel like I watched this series grow up thanks to the author letting me read the trilogy. This was an amazing end to Fortune’s reign of terror but I feel like a spin off series could come from this.

It kept that youth feeling without shoving it in your face and really kept in mind that these are just kids dragged into something way over their heads but they work through it the best way they can.

The writing continued to drag me into the story, the pace was excellent for the plot and the cover, as always, is amazing.

I feel like I should have known what Cole was going to do, and maybe I did in the back of my mind it’s rather obvious now that I’m thinking about it but it did surprise me a bit.

And Henry! Henry! I was about to throw my Kindle when he died and I would have stopped reading if Cole hadn’t gone back in time to bring him back. You can’t play with my feelings like that!

Full of action and very little romance in this one because of Coles decision but I am so sad that this series is done but I’m happy about it as well. I feel like this could be relatable to teens and believe that this is a good series for them to have teens who are heroes themselves instead of sidekicks. Also a fun read for adults, speaking from experience.