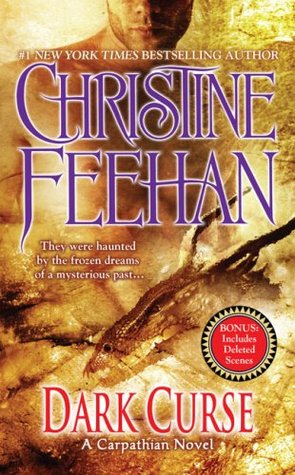 Blurb: Lara Calladine is haunted by childhood memories of being held prisoner in an ice cave and kept sane by the whispered stories told to her by her imprisoned aunts. They instilled mage and Carpathian magic deep within her and then helped her escape. She has spent years searching for the cave in hopes of finding the answers to the riddle of her past as well as finding her aunts who may have given their lives saving her. Nicolas De La Cruz has returned to the Carpathian Mountains–his homeland–on orders from his eldest brother, Zacarias, to bring news of a conspiracy to the prince of their people. He is weary of his long existence and plans to end it away from his brothers where they will be unable to stop him once he has fulfilled his duty. Lara and Nicolas’ paths collide in an explosive adventure that rocks the Carpathian world.

Review: I have mixed feelings about this couple, Nicolas especially. I thought that I didn’t really like him because of how he treated Lara after she told him a good couple of times that she wouldn’t be a prisoner again.

I’m happy he learned from it but the De La Cruz brothers are just so self-centered that I’m not really a fan of them, except for Riordan, he’s the only one that didn’t seem like a jerk.

The couple aside, it was really great to think about and have them save the dragons that have been with readers since Dark Descent and Dark Demon, along with learning more about Razvan.

The characters felt real to me, even though I’m still not sure how I feel about Nicolas, I still felt a connection with them, though not with their romance.

How Lara felt made the romance slow but I wouldn’t expect it any other way and this story really furthered the plot, finding out why pregnancies are so difficult and learning that the dragons are just decorations.

The meetings also made this story interesting, especially when the warriors met to discuss women fighting and the ritual to help Raven and Savannah. With everything going on in this book, I should have felt overwhelmed but this was written so well, I felt like I was really in the thick of things.