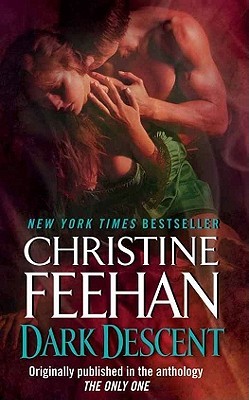 A bit longer than Dark Demon but still a novella, and the first time the readers see a plot unfolding. Slowly but surely the major plot is coming out. First we get jaguars and now mages, even though I’ve read this series many times, I’m still excited to see where it leads.

The dream Joie has about her parents really explains things, if the readers know how to interpret it.

There’s quite a bit going on and while I do wish the couple got some more time together, I don’t think the story would have done as well without all of it. Or, maybe I’m just saying that because I got to see Gary in action after not seeing him since Dark Magic. A little side note, I’ve been rooting for Gary and Gabrielle since the moment they met and I’m struggling very hard to keep Dark Promises at the end and not just grab it and read it. And if any of you have already read Dark Promises, don’t spoil it for me.

I do wish the that the readers would have gotten more of the mind to mind interaction between Traian and Joie that was implied in the beginning before they physically met, instead of going straight to the meeting.

I do love that Joie is just so much sassier than anyone else I’ve read about so far, especially when she’s talking to Traian while facing a vampire, that she sounds like she’s talking to neighbors I found funny. Of course, I wasn’t able to re-read Dark Legend and I can’t seem to recall if Jaxon was just as sassy.

Honestly, the couple was alright but, as there wasn’t a lot of romance time I was mostly excited about Jubal, Gabrielle and Gary.

This was a fast-paced action-packed novella that has the start of the series long plot.