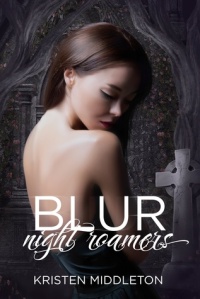 Blur: Danger lurks in the dead of night…

Seventeen year old Nikki and her twin brother, Nathan, move to the small town of Shore Lake to start over after their mother is brutally attacked. When a missing teenager washes up on shore during their first night at the cabin and there are whispers of vampires in Shore Lake, Nikki begins to realize that there are things roaming in the darkness that are far more sinister than what they left behind in the city.

Review: I felt like the author only gave the readers the surface of the characters. It was almost like a television show showing it’s pilot episode. Not that good but you’re still curious about how it’ll turn out and maybe it’ll get better.

One of the first vampire books I’ve read that the main female character didn’t meet the vampire right off the bat and instead, got with one of the human boys. The reactions aren’t really what I expected, especially at the end there, it was kind of forced onto the reader it seemed. Maybe the next book will delve more deeply into the emotions.

This book didn’t waste any time either, it was short, sweet and to the point, giving the reader information that you don’t normally get in the first book.

I’m also not really sure about who the love interest is or if there’s going to be a love triangle here. I don’t know but, I’m curious to find out.

This really seems like it could have potential, it could be a great series but it also has the opportunity to go the other way. Even though it’s the first book, it kind of feels like the middle.

For a filler book and a quick read, it’s alright but, I wouldn’t exactly shout it from the rooftops. It’s a little different from the other vampire books but, otherwise, it’s a little plain.